The buildup was much slower than it really needed to be, and it was hard not to zone out occasionally.

Why does everyone have to get mutilated all the time? Not just killed, but mutilated and tortured. Once? Fine. Twice? Pushing it. Every time someone gets killed? Just gosh. Too much darkness that really doesn’t need to be in there.

So much frustration with this book. For every win, there are ten losses. I’m tired of everyone else having the upperhand and seeming to know things they aren’t supposed to know. The only character I ended up liking in this book was Dorian, and he only had a few pages here and there.

Can I just read an abridged version of the next book? Lol. I really want to see where it all goes, but without the slow buildup.

I’m on a Sarah J Maas kick lately! I have loved all of her books, and she is one of my top favorite authors. I love the way she writes, I love all the complex details that come together at the end of each book, and I especially love that I can’t easily predict what will happen next.

My favorite character in this book has to be Manon Blackbeak. Her character arc is for sure going to blow me out of the water in the next books! I’m sure of it. She sees true strength in the wyvern she chooses, Abraxos, who seems to share a soul with her on every level.

I was blown away by Celaena in this book. She starts out as a husk of a shell of what she used to be, and has to find a way to piece herself back together and become the person she was always meant to be. I’m excited to see how Rowan fits into the next book, and how they will progress from there.

Each book in the series keeps getting better and better! I’m looking forward to reading the next one, which is waiting right beside me as I’m writing this.

One word: Chaol! I absolutely love him in this book. He’s so endearing and genuine, and my heart breaks for him. He’s only at the beginning of his character arc in this book, and despite him not knowing where, exactly, his loyalties lie, he’s a good man.

Celaena is also a really interesting character. She has a darkness within her that she tries hard to lock inside, but when it escapes, she’s the scariest person ever. I wouldn’t want to be the one to draw out the beast within her.

This book was artfully written, with twists I didn’t even see coming. I loved the characters, the plot, and the intricate weavings of people and their motivations. I’m excited to see where the next book takes me.

I really liked this book, and I literally could not put it down. However, it was also confusing! There were parts of it I had a hard time understanding, such as whose point of view was whose, though it’s forgivable being the first in the series. I’m sure the other ones have more of the kinks rolled out.

Another issue I had was the magic system. I couldn’t figure out quite what was going on and how it all fit together. On top of that, Calaena was supposed to be the greatest assassin, yet there were only two cool scenes that demonstrated her skills. PLUS, why would an incredible assassin make such a huge deal about making her doors squeaky so she knew when people came into her room, only to be snuck up on not once, but TWICE? (and more if you count the times when Dorian or Chaol showed up out of the blue and she seemed surprised). And even in her sleep. She fell asleep a lot around other people. Either this shows she’s a trusting person, or its a flaw in the writing.

Despite all of that, I loved Celaena’s personality, and I loved the banter between all the characters. I didn’t like Dorian as much as I hoped I would, but Chaol grew on me throughout the book. The foundation for the series is an interesting one, and I definitely want to see more of what Celaena can do, so I’ll be reading the next in the series. 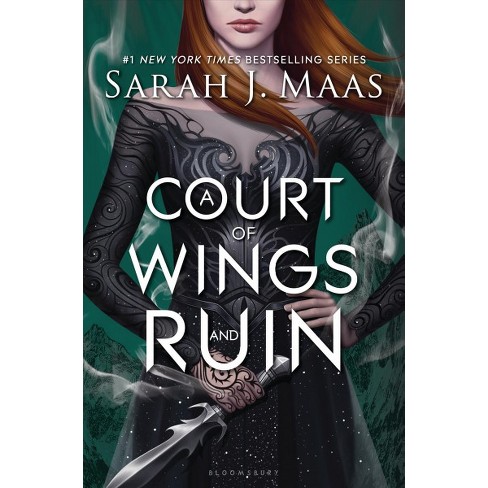 I first came across this book by scrolling through Pinterest and seeing the fan art associated with it. I kept seeing it again and again on my feed, and eventually, I got curious about who these characters were and how they tied together. This led to me checking the book out at the library, and I’m definitely glad I did!

With story elements from Beauty and the Beast and the Hades and Persephone myth, the book weaves a beautiful tale of love and sacrifice, and it begins to make us question what is real and what is not.

I absolutely love the characters. At first I didn’t like Tamlin at all, but he quickly grew on me. The same goes for Rhysand. He came across as evil and unfeeling, but we find that is anything but true. The ending scene with Rhysand and Feyre piqued my curiosity enough that I’m dying for the next book!